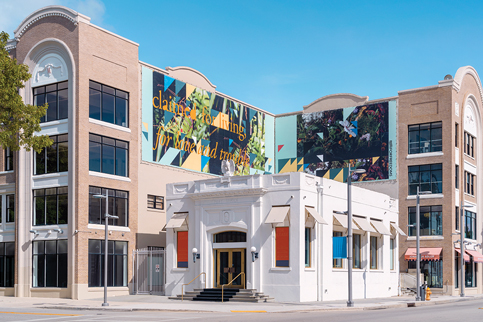 In a creative response to support racial equality, the Miami Design District has partnered with the nationally acclaimed “For Freedom” project and created a two-panel art panel, which is currently on display on the walls of the Moore Building.

The billboard, facing Northeast Second Avenue, was created by Haitian and Miami artist Adler Guerrier and is scheduled to be displayed by October 31st. The pixelated art exhibition includes a poetic text “claimed to live, for love and trouble,” which calls into question the idea of ​​freedom.

“We really thought we needed a visual response to the Black Lives Matter movement, and what’s very nice about this project is that it’s not in protest language – it resonates in art form,” said Claire Breukel. Curator of the Miami Design District and Dacra.

“For Freedoms” is a platform for creative civic engagement, discourse and direct action. The 2016 initiative movement was founded by artists Hank Willis Thomas and Eric Gottesman; and Inspired by paintings by American artist Norman Rockwell on The Four Freedoms of Franklin D. Roosevelt (1941), who advocates freedom of speech, freedom of worship, freedom from poverty, and freedom from fear through exhibitions, installations, and public programs. In 2018, they launched “50 state initiatives for freedom: the greatest creative cooperation in the history of the United States.”

“We imagine the functions of billboards as a fabric with the language of poetry and desires. The billboard wants to be like a fabric stretched on a Moore building and wanted to wrap around someone, ”said Mr. Guerrier, who used photography and digital components to make two-panel billboards.

Viewers can explore the textures of palm trees and botanical bright sunny colors. Using the mind as a work of art along with the camera, paper and pen and digital software is the way the art form merged, Mr Guerrier said.

It was very important to help the creative community in Miami during the time when many of them lost their jobs and places to create their art, Ms. Breukel added. “Just like international artists, our local artists in Miami are just as good and we want to show that on a level playing field.”