The state is completing a six-year upgrade of Chrome Avenue... 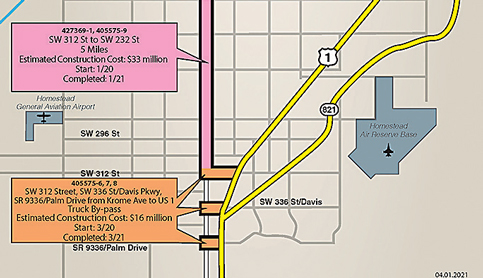 After more than six years of uninterrupted construction to improve Miami-Dade’s westernmost road, the Florida Department of Transportation’s (FDOT) Krome Avenue improvement program has been completed for $ 260 million.

On Friday, FDOT announced the completion of the 11th and final project in the program, which began in February 2015.

“The projects deal with safety, floods, water quality, economic competitiveness and the preservation of the existing pavement,” said FDOT project manager Jonathan Fundora, adding that FDOT programs with similar projects to improve Kroma Avenue have been underway since 1999.

The latest and final part of the current program, a $ 16 million one-year Horizon Contractors project that included the construction of a new facility that allows trucks to bypass Homestead’s historic city district, was completed 42 days ahead of March 30, staff said. FDOT.

Works along the full length of Kroma Avenue are included:

■ Extending the path from two to four lanes.

■ Reconstruction of roads and shoulders.

■ Improving existing traffic and pedestrian signals according to applicable standards.

■ Adding plastic poles through the corridor between the lanes to the north and south “to increase awareness and discourage passage”.

■ Installing a 40-foot median in some parts.

“Pavement widening has been crucial to ensure safer, more efficient commuting for drivers in the area, and the multi-purpose trail provides a special trail for cyclists and pedestrians,” Mr Fundora said.